Mokyr believed that the Industrial Revolution was greatly aided by the technological changes which came about through an increase in scientific knowledge from what he termed the Industrial Enlightenment. This enlightenment came about through increased scientific knowledge, skilled craftsmen and experimentation. Scientific knowledge improved through a number of factors; firstly overall education improved as higher real wages meant that it made more sense for couples to have fewer children but to invest more in their education. This was further enhanced by increased urbanisation which increased the incentive to learn as urban citizens would need to read, write and count to conduct business and trade. Literacy rates did in fact improve; Allen demonstrates this by evaluating how many people can sign their own name rather than write a squiggle, alongside improvements in numeracy.

Secondly, there was a large increase in the number of scientific institutions, such as the Royal Society and the French Academie Royale, which allowed scientists to propagate ideas and build upon past successes more easily. This was further enhanced through the increase in scientific journals and magazines which attempted to reduce access costs by enabling scientists to realise what theories existed so they wouldn’t needlessly reproduce theories or inventions and additionally so that they could tinker with ideas to improve or adapt them to different industries. Both these factors can be seen as a significant development which enabled the Industrial Revolution to occur, because it improved the relationship between industrialists/businessmen and scientists. Prior to this Enlightenment, scientists tended to work by themselves and were reluctant to share their ideas for fear of having them stolen. This meant that ideas weren’t shared, improved upon and actually used in industry. Mokyr believes it was Francis Bacon who led to a new way of thinking whereby scientists began to share work – leading to the Republic of Letters; a group of thinkers who publicly wrote to each other proposing and critiquing ideas – and were less reluctant to share ideas as they believed they would receive patronage and prestige from their perceived genius. Moreover there was a radical new way of experimenting and believing in the power of science over divine intervention, which could be responsible for fuelling the technological revolution as the new way of thinking meant that inventers weren’t reluctant to improve upon ideas (through experimentation) and also tried to learn how nature worked and use this in their ideas.

Mokyr believed that this new way of thinking which resulted from Baconianism thought was responsible for the micro-inventors of the time who ensured that the technological revolution wasn’t a short-lived burst of ideas but instead a sustained barrage of technical development and improvements.

Allen agreed with Mokyr that it was necessary to have a supply of technical thinkers to allow inventions to occur and innovation to happen, but he didn’t agree that the Enlightenment was restricted to a few macro-inventors. Instead, Allen puts a greater emphasis on the role of micro-inventors – tinkerers – who refined macro-inventions to make them cheaper and more appropriate for industry, as well as adapting the use of machines to allow them to be diffused through novel ways into different sectors. For example, better gears which were used to improve mechanical movement in machines, making them smaller, more efficient and more able to do larger jobs resulted from the improvement in gears in the watch industry: this wasn’t a macro-invention but refinements in micro-inventions which were diffused across the economy and resulted in better machines. Moreover, Allen doesn’t believe that it was the Enlightenment circles (the societies, and informal coffee house lectures) that led to the increase in technological thinkers; he uses data that shows that only around 50% of prominent inventors had links to these groups. He argues that education and the accumulation of human capital was more responsible for the increase in inventors.

If Mokyr’s view is correct then we would expect total factor productivity growth to be high during the so called technological revolution, Crafts argues that it wasn’t, mainly because he believes that technology only benefited a few – small – sectors and didn’t affect the economy on an aggregate level. Furthermore he believes that there is a long time lag from invention (the creation of a new machine) to innovation (micro-improvements to the machine to make it work more efficiently or for different purposes) to diffusion (the macro-invention is adopted on a wide scale by firms in industry). Crafts estimates that total factor productivity (improvements in technology which lead to higher productivity) only contributed 18% of the increase in total output growth between 1800-1830. He doesn’t believe technology played a great role in the economy because it didn’t affect a large number of sectors. For example, the service sector was largely unaffected by technological improvements, but this sector accounted for about 30% of overall employment. Furthermore lots of other industries weren’t mechanised until much later on, thereby casting doubts on Mokyr’s strong belief that the enlightenment played a large role in the Industrial Revolution.

On the other hand Allen didn’t believe that the Enlightenment in itself was sufficiently responsible for the Industrial Revolution. After all there had been technological discoveries in the 16th century and England wasn’t unique in having intelligent thinkers, the Enlightenment happened all across Europe and many major discoveries came from the continent, why didn’t the Industrial Revolution happen elsewhere, for example France or Germany? Allen believed that it was because relative factor prices meant it paid to invent in England as oppose to the continent. In England real wages were high and energy prices (coal) were lower, especially compared to Europe. This meant that it paid to invest in research in development and create expensive macro inventions in England (especially with its well developed patent system meaning a temporary monopoly can be imposed ensuring profits for the inventor) and not elsewhere because there was demand for capital-intensive goods which would mean that a firm could substitute expensive workers with cheaper energy. This was not the case in low wage France where the rate of return on buying a spinning jenny, for example, was only 3% compared to 38% in Britain, showing that it didn’t pay to invest in labour saving technology in low wage France. That is not to say that there wasn’t supply of technological ideas and products elsewhere just that it didn’t pay to invest in them in countries other than Britain. 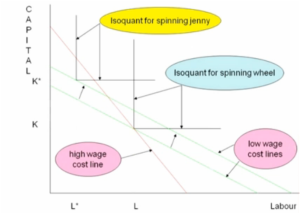 We show what this belief would look like graphically above [from Allen’s Tawney Lecture podcast]; England operates on a higher isoquant than France due to higher labour costs. Labour-saving machines cause a leftward shift of the high-wage cost line, and we can see that this benefits British producers but not French producers where the low wage means it doesn’t pay to invest in labour-saving capital.

If it was Britain’s high wages that were responsible for the increase in technology then why didn’t this happen in the 15th Century after the Black Death when real wages were also high? It was due to the lack of coal as a source of cheap energy and also due to the lack of technical thinkers which really only came about through an increase in human capital accumulation and from the change in thinking after Bacon.

But Mokyr could argue that coal only became cheaper due to macro-inventions which allowed technical improvements in the finding, extract, transporting and utilisation of coal which increased the supply to meet demand. Without such macro-inventions, which may have resulted from the enlightenment, cheap energy wouldn’t have been possible. Additionally, Mokyr did argue that although relative factor prices determine the direction of change (i.e. to labour or capital saving inventions) they don’t alter the intensity of invention. In other words, if England didn’t have a high wage economy then inventions would have been more labour intensive but it wouldn’t have slowed technological growth.

Indirectly, it could be proposed that urbanisation therefore played a large part in the technological revolution – urbanisation lead to higher real wages stemming from high demand from ports as a result of the burgeoning Empire, it led to the development of coal mining and hence a cheap energy source following on from high wood prices due to high urban demand, it encouraged investment in education and the acquiring of human capital due to the benefits this would accrue from being able to conduct business and finally it permitted greater social interaction between radical thinkers – it is hard to conceive scientists being able to meet and discuss ideas in the rural countryside.

To conclude, Mokyr placed a heavy weight on the institutions associated with bringing together industrialists and scientific thinkers, he believed that the technological revolution largely resulted from macro-inventions by a dozen or so radical thinkers and was diffused through a few thousand skilled craftsmen who passed on the skills and technology across the country. Allen doesn’t believe in the same extent that the enlightenment was responsible for the Industrial Revolution. He believed that the increase in supply of technological thinkers was a necessary condition for the technological revolution, although unlike Mokyr he placed greater emphasis on the micro-inventors of whom fewer had links to the enlightenment establishment, but that it wasn’t sufficient for the industrial revolution. He backs this up by showing that there were technological thinkers elsewhere but the revolution didn’t happen there, in his view, because they didn’t have a high wage low energy cost economy. For Allen it was this high wage low energy cost structure of the English economy which meant that it paid to invest in Britain and thus led to the development and more importantly adoption of technology which supposedly fuelled the Industrial Revolution.