Over the period 1850-1914 there was a decline in Britain’s overall labour productivity comparative to its competitors – against the US Britain was more productive in 1870 but was overtaken during the 1890s – in 1870 US/UK labour productivity in the aggregate economy was 89.8 which rose to 117.7 in 1910 (Broadberry 2006) demonstrating the ability of foreign nations to overtake Britain on this measure. Zooming in on sectoral labour productivity, however, we see that there wasn’t a large change in manufacturing labour productivity. According to Broadberry (2006) these figures for UK/US are in the range of 150-193 between 1870 and 1914: the US had an absolute advantage but this didn’t dramatically decline over the period. According to Habbakuk the reason for this absolute advantage, which was of a magnitude 2:1 by 1850, was due to labour scarcity but resource abundance in America which meant that capital was used in place of labour augmenting labour productivity.

This seems to be the case for the US and Germany: in 1871 Germany had 49.5% of its labour force working in the agricultural sector and the US even higher at 50% (Crafts). This is compared to Britain’s share at 22.2% and may explain why British aggregate labour productivity performance was high in 1871 compared to its competitors: it had a greater share of resources employed in higher productivity sectors.

Over time the US and Germany shifted resources from agricultural into manufacturing and services, which we have already said have higher productivities, and thus mathematically it has to be the case that aggregate labour productivity rose due to this. This shift was due to high productivity growth in agriculture which meant there was surplus labour in this sector which could be transferred to industry where there was a shortage of skilled labour. By 1911 agriculture had declined to 34.5% of labour employment in Germany and down to 32% in the US (Crafts), although this was still higher than the UK’s 11.8% share it was a significant drop from 1871. In the US, employment in industry rose from 24.8% to 31.8% over this period and in services from 25.2% to 36.2% (Crafts).

It is relevant to point out that Broadberry finds the correlation co-efficient on aggregate productivity levels to be 0.98 for services, 0.85 for industry and 0.65 for agriculture. He shows that by 1910 US labour productivity in industry is 93.2% greater than Britain and in services this was 7.4%. This is further evidence that if the US and Germany were seeing greater employment in manufacturing and services, at the expense of agriculture, that they would also see higher aggregate labour productivity.

Moreover, whilst Germany and the US were moving workers from agricultural to manufacturing and services, Britain was doing the same but was moving workers more towards services, which had lower productivity. Over the period 1870-1910 10% of the labour force moved from agriculture with around 7% of this going to services and only 2% going to manufacturing (Crafts). This doesn’t explain a decline in productivity, but does show why productivity may not have been increasing as rapidly as elsewhere.

We have already seen that a portion of the lead that competitors had in labour productivity growth was due to their sectoral shifting of resources – something of which Britain had no control over – and the British move from agriculture towards the service sector rather than manufacturing. Broadberry finds that Britain was overtaken by its competitors in service labour productivity, which if coupled with the competitor’s shift in sectoral employment could explain the reason for low UK aggregate labour productivity despite fairly consistent manufacturing productivity. In 1870 US/UK labour productivity in services was at 85.9 but this rose to 107.4 by 1910 (Broadberry), whilst this doesn’t seem like a large decline it is accentuated by the shift in resources towards this sector by the US and Germany. The reason given for this decrease in service productivity was because the UK was operating on a low-scale, customised high-margin network orientated production process whereas the US was developing high-scale standardised low-margin hierarchical structure production process which had higher productivity.

Turning to whether this fall in aggregate labour productivity was due to British failure we will firstly examine why the UK continued to operate on customised services compared to the US’s standardised production and then look at manufacturing and see if Britain failed here.

America developed new technology which facilitated the industrialisation of services, allowing an increase in productivity, through selling a standardised output at low cost. This required a hierarchical organisational structure and strong management to conduct business across that vast nation and to facilitate the selling of a standard product to the masses. This industrialisation of services was slow in Britain because she had lower levels of education in management (instead focusing on skills) and there were many small firms which operated on networks of trust rather than large firms which could command economies of scale. It might be argued that this was a failure in Britain: she didn’t invest enough in education of management and nor did she invest enough in these technologies such as the telegraph, typewriter and calculating machines which allowed higher productivity in the service sector. In reality, the lack of education was not the fault of the economy, but potentially of the government.

We have seen that the UK was evolving to expand its service sector which explains why productivity wasn’t growing quickly, this fact reflects that Britain had higher incomes and wanted to increase its standard of living by enjoying more services such as education. Whilst this would appear to reduce aggregate labour productivity (if we had shifted workers towards higher productivity manufacturing then we would have enjoyed greater aggregate productivity gains) it can’t be seen as a failure if it increased the living standards of the population. Therefore if this factor were responsible for the low relative aggregate labour productivity then it wouldn’t mean a failure for the UK economy.

In manufacturing we know that the US had a labour productivity ratio of about 2:1 over this period with Britain. German productivity advantage was much smaller and was less than 1 before the 1890s before Germany overtook Britain. Whilst there wasn’t a huge change in this figure it is vital for us to understand why Britain was failing so badly in this area for us to understand whether there was overall failure. The short answer to this question is that of Rothbarth and Habakkuk which says that Britain, and to an extent Germany, had lower manufacturing labour productivities than the US because America used greater capital due to varying factor prices which ultimately reflected scarcity. 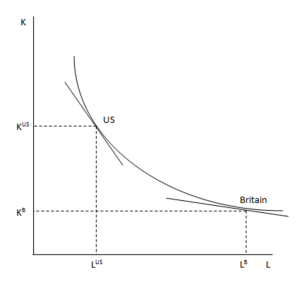 Building on from this point the US had a further advantage in that it had access to a larger market (which was growingly shut off to Britain through the use of trade barriers) which was more standardised. Whereas in Britain, due to class identities, demand was more customised meaning it was difficult for mass production to occur. In the US this standardised mass market meant that goods could be produced with cheap unskilled labour using special purpose machinery which needed long production runs to be feasible. This benefitted the US because labour, in particular skilled labour, was scarce and thus expensive, but as a result of an abundance of natural resources its capital goods were a lot cheaper. On the other hand, in Britain there was a large supply of skilled labour, following on from the Industrial Revolution and Britain’s high apprenticeship system (2.5% of the labour force were apprentice’s compared to the US figure of 0.3% – Broadberry), but natural resources were more expensive (especially as the cheap easily accessible coal had already been depleted) and so Britain maintained a production process reliant on skilled labour which used only general purpose technology. This suited her well because the fragmented demand market meant that there wasn’t a large enough market to invest in special purpose technology.

We can draw on an identity from macroeconomics to show that having a capital intensive production process will result in higher labour productivity. Y = KαL(1-α) by dividing each side by labour we can derive output per worker as a function of capital:

We can see that if capital, K is higher then, ceteris paribus output per worker will also be higher, and thereby demonstrating that the nature of the US economy means it will have higher labour productivity.

McCloskey and Sandberg sum this point up well – British firms chose more skilled-labour intensive production methods because it paid to do so, and so there wasn’t a failure, in this respect, of the UK economy. This can be shown because Germany also had low labour productivity in manufacturing relative to the US, despite its adoption of new technological processes, because it had similar factor endowments as Britain.

However Chandler disagrees with this view that Britain didn’t fail and argues that US manufacturing success stemmed from investment in production, marketing and management. If British firms had invested in marketing then they may have been able to extend their market and encourage the purchase of standardised products which would have meant they could have feasibly used new capital-intensive machinery which would have increased labour productivity. This argument is flawed because Britain wouldn’t have been able to invest in either production or marketing due to the atomised nature of industry (Lazonick and Elbaum) which led to high competition, low/zero supernormal profits and thus little profit with which to invest with.

In conclusion it is difficult to say that the British economy was responsible for the fall in aggregate labour productivity relative to competitors. Firstly, it was inevitable that competitors would catch-up and overtake Britain, as Clapham points out “half a continent is likely in course of time to raise more coal and make more steel than a small island”, and Britain had no control in the shift of US and Germany labour away from agriculture into more productive sectors. Secondly, the reason Britain –like Germany – didn’t adopt American technology or production processes was because it didn’t pay: skilled labour was cheap and natural resources expensive in Europe and this meant it made more sense to use less capital which results in lower levels of productivity. This was shown by Leunig in the textile industry with America adopting the more productive ring spindle because it had greater access to high quality cotton, whereas Britain didn’t and so stuck with the mule spindle which required lower quality cotton but higher amounts of skilled labour which Britain had access to. Therefore Britain was simply operating within the constraints it was endowed with and was also limited in that it had developed the first industrial revolution and so had path-dependent institutions which were hard to change to adapt to the new economic circumstances, such as the move towards motor-vehicles, chemicals and electrical goods, due to the size of the traditional industrial sector.