Unemployment was persistently high during the inter-war years at 10.9% (Feinstein) compared to an average of 5% pre-WWI. Even within the inter-war period there were large differences in this rate – jumping from 17% in 1921 to 9.7% in 1927 and reaching a peak of 22.1% in 1932 (Benjamin and Kochin). After the War, people were tired and the unions were strong and were able to successfully bargain for a reduction in the average working week to 47 hours from 54 (Eichengreen).

This increase in the real wage – caused by a reduction in working hours without a fall in the weekly wage – would likely have increased the number of people entering the labour force: workers previously not looking for a job would enter the labour force attracted by this higher real wage. Therefore as a statistical measure, unemployment was bound to rise, because Unemployment = 1 – (Employed/Labour Force). 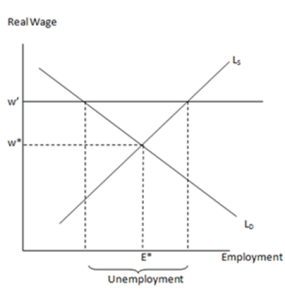 This higher real wage – equivalent to an increase by 13% (Eichengreen) – wasn’t met by an increase in productivity and as a result employers made some of these, now more, expensive workers redundant contributing to higher unemployment. In our statistical equation this would be a fall in the number Employed increasing Unemployment. Equivalently, we can see from the graph the same effect – unemployment is equal to U because at the higher real wage, w’, only E1 of labour is demanded but E2 is willing to work (more people enter the labour force as previously described). In this situation there is excess labour supply caused by the artificially high wage w’. We have to ask then why the real wage didn’t gradually fall and edge back towards the equilibrium rate w*.

Firstly, behavioural research has shown that nominal wages are sticky downwards: workers don’t accept lower nominal wages; contracts prevent this happening in the short term; and firms are reluctant to reduce wages for fear of demotivating their workforce and seeing lower productivity. If nominal wages can’t fall, then the only mechanism to reduce real wages is for prices to increase. But during 1921-25 there was high deflation as the government tried to reduce prices so that it could return to the gold standard at pre-war parity. Hence, there was little scope to reduce wages for those whom had jobs and furthermore the real wage was increasing over the 1920s due to this deflation, as we saw above, a higher real wage would increase unemployment as more workers are attracted to the labour force.

Secondly and perhaps a stronger argument for why firms are reluctant to reduce wages, is due to the insider-outsider hypothesis. This argument states that those who have jobs are “insiders” and they have power for setting wages, the “outsiders” (unemployed) have little or no power for setting wages, even if they are prepared to accept a lower wage. The reason for this is because firms are usually unable to threaten the insiders with being sacked and replaced by outsiders unless they take a pay cut, when the turnover costs of labour are higher than the wage difference. In other words, if it costs more to fire a worker and hire a new worker than it does to continue paying the insiders a higher than equilibrium wage then this wage will persist. 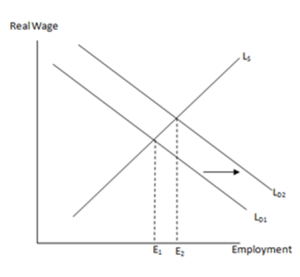 A high real wage would only keep unemployment high if productivity was low. If productivity is rising then there will be a rightward shift in labour demand (as shown) and so employment will rise. This is in fact what happened, from about 1923 (Solomou) productivity – measured by the GDP deflator and not RPI as some historians have erroneously attempted – was growing faster than real wages which explains why unemployment gradually started to fall. Therefore the negative effects of the supply-side shock diminished over 1920s but unemployment still remained high and jumped enormously in the 1930s. We could blame some of the persistent unemployment on hysteresis which may explain why unemployment remained above 10%. Unemployed workers lost/forgot their skills during their bouts of unemployment which made them less desirable to hire. Lower levels of investment during unemployment periods meant that the capital stock was reduced and so the ability to absorb a larger labour force was also reduced. Firms couldn’t use the condition of being able to maintain a job as a signalling system: if all workers are unemployed then a firm is unable to tell if this is because they are useless, or just unlucky in being made redundant. Finally cognitive dissonance means workers reduce their effort to find a job the longer they remain unemployed. These four factors show that unemployment can remain high long after a negative shock to the economy.

However, the main driver of unemployment during the 1920s and 30s was not the negative supply shock as discussed, but a deficiency in demand caused by contractionary fiscal and monetary policy. We can tell that this was the case by looking at the graphs below. A negative supply shock would have shifted the aggregate supply curve leftwards, which we can see would have caused inflation. This contradicts the evidence which shows that deflation was occurring over the period, this can be explained by a leftward shift of the aggregate demand curve (right) and we now explore why this occurred.

We have already briefly mentioned why aggregate demand was low: the government wanted to return to the gold standard at pre-war parity and due to the inflationary effects of the war had to deflate the economy to do so. This meant reducing government spending and setting high interest rates, which reached 7% in 1920. Lower fiscal spending would have reduced the G component of AD (Y=C+I+G+NX) and hence shift AD left. Government spending was actually cut by 75% between 1918-20 (Eichengreen). Contractionary monetary policy through higher interest rates would have had a similar effect, with the affected variables being C and I which would have fallen as they are an inverse function of the interest rates. This lack of aggregate demand is a better explanatory variable than the negative supply shock – although this may have played a part, the fact that there was deflation shows it wasn’t the principal factor – and can explain why unemployment was high during the interwar period. When policy shifted the unemployment rate also changed – unemployment peaked in this period in 1932 after the massive demand shock from the 1929 financial crisis, but the rate gradually fell after 1932 as the government devalued from gold and pursued a policy of cheap money. These policy changes, which were the opposite of contractionary, led to lower unemployment  and demonstrate that it must have been contractionary policy keeping unemployment high.

The mechanism for the gold de-pegging to lead to increased employment was three-fold; firstly there was a direct benefit to exports due to a lower nominal exchange rate which should have increased the demand for British exports and this increased demand would have passed through to higher derived demand for workers. This is only an impact effect though, eventually the higher demand along with more expensive imports causes inflation to rise which erodes the gains of the devaluation, but by reducing unemployment it may have prevented the effects of hysteresis and so help reduce unemployment in the long term. Secondly, we just noted that the devaluation following the de-pegging causes inflation through higher import prices which leads to a lower real wage, and as discussed earlier, this will lead to more demand for labour. Finally, and perhaps most important to our discussion, the devaluation unconstrained monetary policy to allow the central bank to reduce interest rates (it no longer needed to adjust it to maintain a fixed exchange rate, but could instead adjust them to suit the needs of the domestic economy) and also reduced the need for the government to maintain a balanced budget. Subsequently the Bank of England reduced interest rates substantially which boosted investment and consumption (as well as reducing government debt refinancing costs) and provided a boost to AD, reducing unemployment.

In conclusion, the main cause of unemployment during the inter-war period was the deficiency in aggregate demand caused by contractionary fiscal and monetary policy throughout most of the period. The negative supply shock caused by the reduced working week did have a negative effect on unemployment, but this wasn’t the most important factor and the effects of this were gradually eliminated by increasing productivity. It could even be argued that this negative supply shock actually reduced the level of unemployment – if workers were able to work fewer hours per week then a firm wanting to produce a fixed output would need to hire more workers to meet its quota on time. Unemployment persisted in the late 1930s, despite a reversal of policy to boost the economy along with the effects of war mobilisation which should have reduced unemployment, mainly due to the lag effects of hysteresis, whereby there was an atrophy of human capital along with a lack of capital stock which depressed the skills, and demand for labour.