The importance of accurate GDP data is often understated and there is a need to document carefully the extent of revisions to statistics on economic activity and evaluate how this affects macroeconomic policy as well as examine ways to improve statistical methods.

The Office for National Statistics (ONS) has a trade-off between providing estimates on measures of economic activity, such as GDP, quickly, but also accurately. Information sources used to calculate GDP often take up to three years to arrive, but policymakers need to know before this the state of the economy. As such, the ONS uses a fraction (44%) of the eventual data source to make first estimates of the GDP. As this does not provide a complete picture there are many revisions to GDP over the following three years to reflect new information as well as updated statistical techniques. This often means that early GDP estimates are incorrect, as we can see from Figure 1 where we show the difference in real GDP estimates a month and a quarter after the first release. We see that there has only been one occasion where GDP figures have not been revised a quarter after the first release, and only 14 times when there has been no change after a month. There were 73 upward revisions and 33 downward revisions after the first month following release, suggesting a downward bias in estimation, although the ONS believes there is no statistically significant bias in the long-run.

The importance of this data – and thus the significance of subsequent revisions – is phenomenal given that fiscal policymakers in the Treasury, and monetary policymakers at the Bank of England, have to use estimates of GDP to fine-tune the economy. If the estimates they have are incorrect then this can have detrimental effects for the economy. The Chancellor has to make decisions on how to adjust taxes and what spending should be undertaken in the next Budget based on the most current estimates of GDP; if these are incorrect then the policy prescriptions enacted could end up being harmful for the economy.

It may also be the case that GDP is more unreliable over the business cycle, as economic volatility could make GDP estimating more difficult. If this is the case then policymakers could be prescribing the wrong treatment at the most critical junctures. A preliminary examination would suggest that there is a positive relationship between the extent of revisions and the business cycle, as Figure 2 shows. This implies that when the economy is growing GDP is understated and vice versa. However we would like to conduct further analysis to test the robustness of this result and explore the mechanisms through which this occurs. 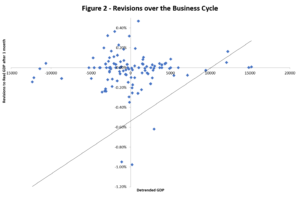 It might be the case that information can be provided on the state of the economy through simple rules of thumb such as using the claimant count or the change in tax revenues to predict economic activity. Figures 3 and 4 show such measures and we see tremendous positive correlation between GDP and tax revenues, and negative correlation between the claimant count and GDP. Such information could potentially be extracted to improve the early estimates of GDP. 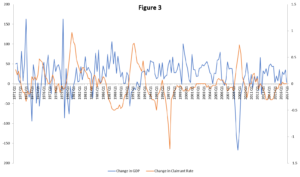 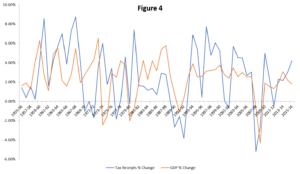