Here is an essay we were set for class. As always feel free to leave any feedback below.

A concentrated market (one in which there is a high value for the n-concentration ratio) is a market in which there are few firms which possess a relatively large market share. This fulfils one of the criterion of an oligopolistic market.

If the particular market had low barriers to entry and exit and involved no sunk costs then it may be considered contestable. If the incumbent firms were to make supernormal profits 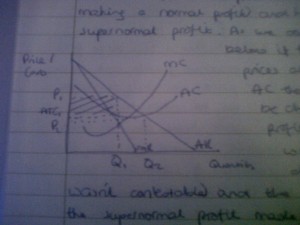 then this would attract new firms into the market which they would be able to do with relative ease as there are no barriers to entry (assumption of contestability). This may lead to the threat of hit and run tactics whereby a new firm enters the market, takes away the supernormal profit from incumbent firms and then rapidly exits the market. The threat of this may lead incumbent firms to set the price at the point where AC=AR (the lowest price where the firm is still making a normal profit) and hence not make a supernormal profit. As we can see from the graph if the firm were to set prices at the point where AR=AC then a price of P2 would be charged with no supernormal profits being made compared with a price of P1 being charged (if the market wasn’t contestable) and the shaded area being the supernormal profit made. Therefore the threat of new entrants in a contestable market results in lower prices for consumers and hence meaning it is competitive regardless of the high concentration. However in reality there are few markets which meet all the criteria of a contestable market as there are usually at least the sunk costs of advertising.

It could also be argued that price wars occur in highly concentrated markets showing that these markets can still be competitive. The reason price wars break out is because a firm wants to attract customers away from other firms with this new lower price. By doing so it will increase its market share and the firm hopes that it will be able to retain these customers when the price rises again. It may also believe that it can take the competition out of the market by undercutting them significantly and stealing their customer base. In the short run consumers will benefit as they will receive lower prices. However in the long run the firm will have to increase its price to recoup the losses it made. Also if the firm that initiates the price war is successful in reducing its competition then there will be fewer substitutes and hence its demand curve will become more inelastic and it will be able to charge a higher price at the detriment of consumers.

To conclusion I don’t think a concentrated market is necessarily anti-competitive due to the threat of contestability and hit and run tactics. However if a market has high barriers to entry and exit then it won’t be considered contestable and hence may charge a higher price at the detriment of consumers.