The article above shows some different methods that anti-trust economists are now adopting in order to identify cartels. The main bulk of the article is based on the Benford Law which states that in a large number of populations the leading number is not uniformly correlated as one may expect. Instead the number 1 is much more likely to be a leading number than the number 9. This can be seen from the graph below which shows the probability that the leading number will be the given constant. 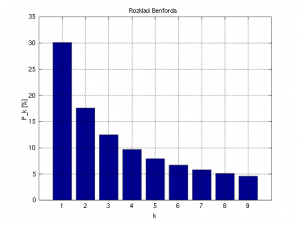 Anti-trust agencies can use this law to spot whether a firm is creating dubious numbers. In a cartel numbers may be generated semi-randomly in order to make them seem realistic (as opposed to conjured up by the cartel), however a quick (and cheap) scan can be run to identify whether these numbers fit with Benford’s prediction. If they dont then further investigations may be warranted.

Another very important point which is made is that prices are usually stable when a cartel is operating. This is because cartels cannot easily communicate frequently and hence usually keep a stable price. They are able to do this as price is usually much higher than costs (since the cartel has extreme market power it is able to set prices high) and therefore any fluctuations in costs can be absorbed by the cartel. If anti-trust regulators are aware of the fluctuations in the costs they may be able to spot potential wrongdoings if prices are stable. However there are other possibilties for why this is occurring (such as lazy managers or extremely elastic markets) and therefore this indicator doesn’t necessarily imply that a market is being rigged illegally, but may although the authorities to single it out for further investigation. Given regulators scarce resources and the opportunity cost of spending taxpayers money on such investigations any tools which reduce the workload (and cost) of the regulators are beneficial.

As the Economist mentions as regulators adopt these new policies, cartels will become aware of their tactics and will hence change their methods to adopt with these new models.