The Big Mac Index is published by the Economist and is used to demonstrate the idea of Purchasing Power Parity (PPP) and is a method of showing whether a currency is under or overvalued in relation to the US Dollar.

The theory behind PPP is that all currencies should be equal, not in nominal terms, but in purchasing terms. So I should be able to purchase a good in the UK using Pound Sterling for the same price as if I were to change my money into Euros and purchase the exact same good in France (ignoring transaction costs). Why is this? If the pound was strong (meaning I could buy more foreign currency for my pound than previously, for example in January £1 = $1.20 and in February £1 = $1.30 the pound has strengthened) then it would be cheaper for me to purchase the good in France than it would be for me to do so in the UK. Economic theory says that if this is the case then everyone in the UK will purchase this good from France, as oppose to Britain, and hence demand for euros will increase whilst supply for Sterling would fall, ceteris paribus. The pound would continue to weaken until it costs me the same to purchase the good in the UK than it does to purchase it in France. This holds true for the reverse, if I lived in France.

Organisations like the IMF attempt to calculate the PPP of a country by creating a basket of goods and working out how much it costs to purchase it in the respective currency. This can then be analysed against the official currency value to determine if a county’s currency is under/over valued. The problem with this however, is that it is rather difficult to find a basket of goods which is equal in all countries. Most countries don’t have exactly the same products (due to availability and cultural taste) which is why the Economist decided to use the Big Mac (new Indexes have been created using the Starbucks Latte). This is due to its universality (it is available in most countries), it is made with exactly the same specifications (therefore costs do not vary in different countries) and data is available on its price (price also doesn’t fluctuate between different regions). However it should be noted that in India beef isn’t used due to religious practises, instead chicken is used.

This method however isn’t fool-proof, in different countries varying tax regimes may alter the prices, in some countries eating at a fast-food restaurant is considered expensive and so demand may be lower than in Western countries. Also the PPP theory shows that all goods should equal the same price, providing they can be traded. It isn’t possible to purchase a Big Mac from India if you are living in the UK! And therefore there is no reason for the price of a Big Mac to be equal in different countries.

Why might a currency be over/under valued? The PPP theory shows that all goods which are tradeable should equal the same price. The demand and supply of currency results in the currency being set so that it costs the same to buy a good in one country as it does in the other. This isn’t the case(as we can see from the Big Mac Index example below). The main reason for this is because of hot money. Hot money, is money which flows into a currency in order to take advantage of a countries interest rates in order to make money, and can be considered a currency distortion. Currently the UKs interest rate is at 0.5%, therefore investors in Britain are getting a poor deal. They may see that in another country (lets call it Econistan) the interest rates are much higher (10%) and transfer their money from the UK to Econistan to take advantage of this 10% interest rate. In order to transfer there money they have to purchase Econ’s (Econistan’s made-up currency), which increases the demand for Econ’s, and since they are selling Sterling to purchase Econ’s the supply of Sterling will rise. The resulting affect of these changes in demand and supply mean that Sterling will weaken and Econ will strengthen. This occurs despite the price of goods in the UK and Econ. Because Econ now has a stronger currency (due to the flow of hot money), the price of its goods may now be overvalued. That is, I could purchase more Big Macs in the UK than I could do in Econ, as the currency is too expensive (because of this hot money). To conclude, the reason that currencies valued correctly is mainly due to the affect of hot money, which distorts it and means it doesn’t hold true to what PPP theory dictates. 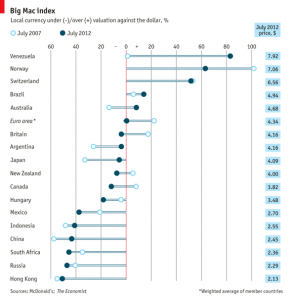