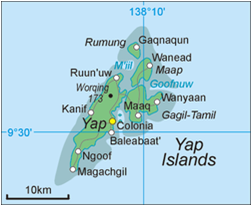 Yap is an island in the Pacific Ocean within the Caroline Islands with a population of around 10,000. Despite being a tiny country which you have probably never heard of before, Yap teaches us some important lessons on the functions of money. That is because money on the island consists of large stone discs, made from limestone and shipped from an island a few hundred miles off the coast of Yap, called Rai. They made Rai there money which they would use for expensive transfers, such as for their daughters dowry. Because Rai is made from limestone it is a mix between fiat money and commodity money. It can’t be called commodity money, because it has very little use except as the currency of Yap. Yet it can’t be fiat money because its existence isn’t decreed, and it is very difficult to increase the supply of rai (which differs from that of most fiat currencies). The only way to increase the supply of rai is to ship more in from the island, but because they are so heavy this was very difficult for the natives of Yap to do, making it virtually impossible to increase the supply of money.

But because the stone discs were so large and heavy the majority of them weren’t moved and stayed in the same place. Despite this the islanders managed to conduct trade with one another because as a community they recorded who owned what stone. Therefore when they made a trade they wouldn’t physically move the Rai, but ownership would transfer. One valuable stone was lost at sea during a storm but it was still used as money even after many years when nobody alive had ever seen the stone.

In 1874 a man named David O’Keefe discovered that he could import large amounts of stones from Palau (where the stone discs were from) using modern ships which made it cheap and easy. By doing so he made himself quite rich in Yap, but by doing this he increase the money supply (an increase in rai) causing large inflation. It can be said that O’Keefe made himself rich through the process of seigniorage.