In the 1970s OPEC, the oil cartel, increased prices which – it is often proclaimed – is responsible for the stagflation in Western countries. Whilst we would naturally expect such an increase in price of a vital commodity to lead to inflation (we will examine these effects shortly), is it possible that there could have been some deflationary effects too?

Naturally basic economic theory would tell us that the oil price increase would be inflationary:

Oil is a commodity which is highly price inelastic (meaning a change in prices isn’t met with much of a change in demand) and so a rise in its price will have to be absorbed by consumers. Additionally, oil is a very useful commodity which is used in many products, for example to produce plastic and power auto-mobiles and power stations. Therefore a price increase in oil, will not only mean higher petrol prices (in itself causing inflation) but would feed through and lead to price increases in many other products.

In reality a lot of what happened during the 1970s was a restriction in oil production and embargos for certain countries, so that the price rose as a result of reduced quantity. This made the situation even worse because there were mass shortages of oil (and thus petrol) and governments were legislating to stop people conducting certain activities on certain days in order to save vital oil supplies.

Additionally, in Britain, the discovery of North Sea oil and it going on tap coincided with this price increase and so North Sea oil became profitable to extract and export abroad. Remember, the process of discovering new oil fields and then spending money and finding the expertise to set these up takes 7-10 years which is part of the reason that oil is so price inelastic in demand. Because Britain was exporting oil abroad there was an increase in demand for its currency, Sterling, this higher demand – whilst supply was constant – caused an appreciation of the currency. An appreciated currency meant it was more expensive to import goods from abroad, thus there was inflation in Britain as a result of this. A more expensive currency made it harder for British firms to export abroad, as it would be more expensive for foreigners to purchase British goods, we would assume that demand would fall. Coupled with higher oil prices (despite the advent of North Sea oil) this led to stagflation: high inflation matched with high unemployment. In comparison, other Western countries who weren’t able to produce oil would at least have benefited from a weaker currency (through selling their currency to purchase more expensive oil) and hence may have been able to export their way out of a balance of payments deficit.

We have seen the reason why oil price rises led to inflation: oil is used in the production of many goods, if its price rises it causes many other price rises, leading to inflation, plus in Britain an appreciating currency led to import inflation. So how can I suggest that there were some deflationary effects to this oil increase?

Firstly, the oil crisis prompted government, and private, financing of research and development into alternative energy sources such as renewable energy supplies which would reduce dependence on oil and thus mitigate the effect of oil price increases. In the long run it is hoped that these alternative energy sources will be cheaper than oil, particularly due to the naturally rising price of oil as reserves are being depleted. Furthermore, research and development was also aimed at reducing dependence on oil by increasing the efficiency of machines and cars. If a car could be made more efficient then it would need less oil and thus reduce demand, and hopefully price pressures (or at least reduce the effects of inflation). This policy could be more short-termist if firms and the government were able to reduce dependence quickly (see below, for example Japan in closing down inefficient steel and iron production which required lots of energy from oil).

Secondly, some governments also implemented policies to try and increase domestic production of energy. Either through production of oil reserves at home or through a policy, such as France of moving into other energy sources like nuclear power, which the French government heavily financed to reduce its dependency on oil as a power source.

Both of these deflationary causes were examined by Ikenberry in “The Irony of State Strength: Comparative Responses to the Oil Shocks in the 1970s”, he believes there were 3 responses taken by the government in response to the oil shocks (see his table below): a neomercantilist response, competitive accelerated adjustment or a market response. In essence, countries like France took the neomercantilist response whereby the state became produce via nuclear power control and through nationalisation of energy firms. A competitive accelerated adjustment was adopted by Japan and Germany, whereby they shut down industries which were inefficient and used lots of energy (i.e. in steel and iron production) and moved to increase the competitiveness of firms so that they could export their way out of the balance of payment deficits caused by higher oil prices. Finally, the US took the market response approach and as such deregulated the market and let prices take their effect: a laissez-faire approach. 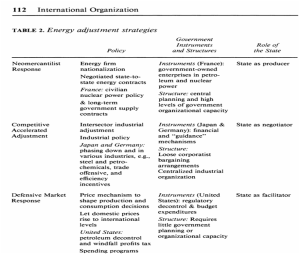 Both these policies are quite long term, so we may conclude that in the short-term the OPEC price increase was inflationary, but over time the government has enacted policies to reduce dependence on oil from OPEC countries, which may prove to be deflationary.