This is an exam question from the Edexcel Unit 2 June 2012 Paper. Have a go at it yourself and then compare with the essay below (you can also check out the mark scheme). I was awarded 30/30 for the essay below, feel free to add any further suggestions in the comment box. I don’t seem to like paragraphs much!!

One macroeconomic policy currently being employed is the use of monetary policy. Monetary policy is the manipulation of interest rates and more recently quantitative easing to control the economy. it is run by the Monetary Policy Committee at the Bank of England. Currently interest rates are at a record low of 0.5%. The BoE intends for this to create an increase in consumption. If interest rates are low then it is cheaper for consumers to borrow and so they may increase spending using borrowed money. This would lead to an increase in aggregate demand of which consists of Consumption + Investment + Government Spending + (Exports – Imports). Hence an increase in consumption should result in an increase in AD. As labour is a derived demand an increase in consumption should lead to an increase in demand for labour and thus a reduction in unemployment as firms need to meet this increase in demand by hiring more staff to produce these goods and services. However there is currently a lot of slack in the economy at the moment with firms working below capacity and some having goods stockpiled. This may mean that an increase in demand doesn’t lead to a rise in employment (or at least not in the short run) as firms sell existing stock and begin to work at full capacity. Also low interest rates don’t necessarily mean that bank rates will be low. If they continue to remain high then this may deter consumers from borrowing and hence not increase consumption. At the same time banks are reluctant to lend to people so consumers may not be able to obtain the funding to spend in the first place.

Another macroeconomic policy which can be used to reduce the level of unemployment is supply-side policies. One of which the government has recently introduced is a reduction in the rights of workers. Firms can unfairly dismiss employees if they have worked with them for less than 2 years without facing legal action. The intention is that firms will be less 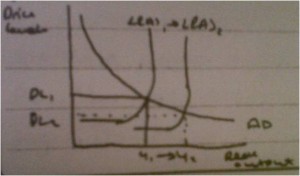 worried about the costs of hiring workers and so employ more people or undertake investment. The effect of this should be a rightward shift in the Long Run Aggregate Supply curve from LRAS1 to LRAS2. This should lead to growth and thus less employment. However this may not necessarily happen. Firms may not be worried about hiring workers due to legal reasons it may just be because there isn’t enough demand in the economy for there to be a reason to hire workers. This supply side policy wont directly create an increase in demand. It may actually result in a reduction in demand. If workers can face the sack without a reason then they may fear more for their job security. This may result in them saving money in case they are fired. If workers are saving then they aren’t spending and this may lead to a fall in demand. Hence there being less demand for workers to produce more goods and services.

Another policy which could be used in order to reduce unemployment is that of fiscal policy. Fiscal policy is how the government uses its powers over spending, taxation and borrowing to affect the economy. One 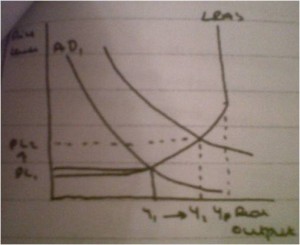 method to increase employment is by increasing aggregate demand through an increase in spending. An increase in government spending would result in a rightward shift of AD from AD1 to AD2 as we can see on the next page. The result of this is an increase in output from Y1 to Y2. The output gap (level of unemployment) will decrease from Y1YF to Y2YF. Also the increase in demand should lead to firms taking on more staff to mee tthe increase in demand. However again firms may just sell off stock and increase capacity thus not employing more workers. If an increase were to occur though, there may be a multiplier effect leaving to a further rightward shift of AD causing a greater demand for labour. The multiplier effect is where output increases by more than the nominal rise in AD. This is because the increase in G would mean someone else can spend that money as can someone else. This may result in further demand causing derived demand for labour. However the multiplier effect is reduced by withdrawals and with spending high the multiplier effect is low. It is also unlikely that the government will increase spending when it is pursuing a contractionary fiscal policy like the coalition is.

It is also important to remember that an increase in employment doesn’t necessarily mean a fall in unemployment if more people become economically active or immigration rises.